The primary design philosophy/goal for my white '91 is maintaining a "stockish +" look and/or feel. Sort of like if Honda had made a "Type-S" version of the 3g, a little more sporty than the SI but not as hard as a "Type-R" version would be. It should remain comfortable, relatively quiet, have full accessories (ice cold A/C especially), and a layman should have a hard time identifying it as modified, if at all.

This post will show what I'm working on suspension wise to meet that goal, in case you want to share ideas or try something similar.


I first ruled out a full coil-over setup like KSports due to the fact that they offer a much too stiff ride for what I'm wanting to do, as well as being very obvious visually. I was left with going the traditional route of new shocks/dampers and springs.

Tokico HP shocks (better known as Tokico "blues") used to be the default choice and are an excellent option if you can find them. But they have been hard to get a hold of in recent years (were even rumored to be discontinued for a while). They also happen to be painted bright blue, which goes against my "stockish +" goal. After a little searching I found that Sachs makes 3g shocks and the brand seems to have a decent reputation, plus they are painted black and look very similar to the stock shocks: 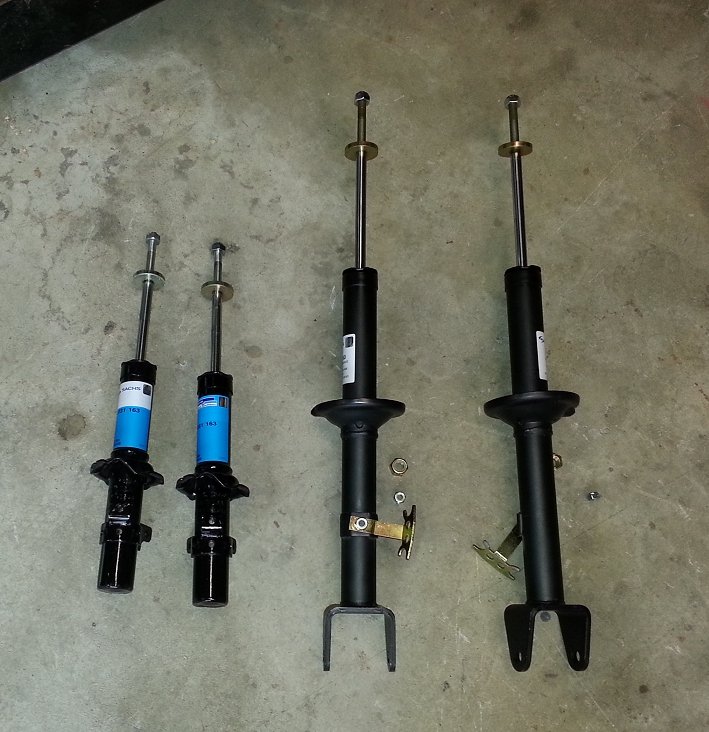 For spring selection I wanted a moderate amount of lowering while keeping a low spring rate for the best ride quality and grip. I had several sets of stock springs hanging around my garage so I opted to cut some coils off a set. I took 2.25 coils off the front springs and 1.75 off the rear. Cutting coils off a spring increases its rate, so first we will look at the specs of the stock springs measured off my car:

Here are the specs after cutting:

That is a 28% increase in rate for the front and 25% for the rear. I cut more off the front primarily so that there would be slightly less wheel gap in the front than rear, giving the car some rake. (This was mostly a stylistic choice.) Here is an example of the lowering/wheel gap after the cutting: 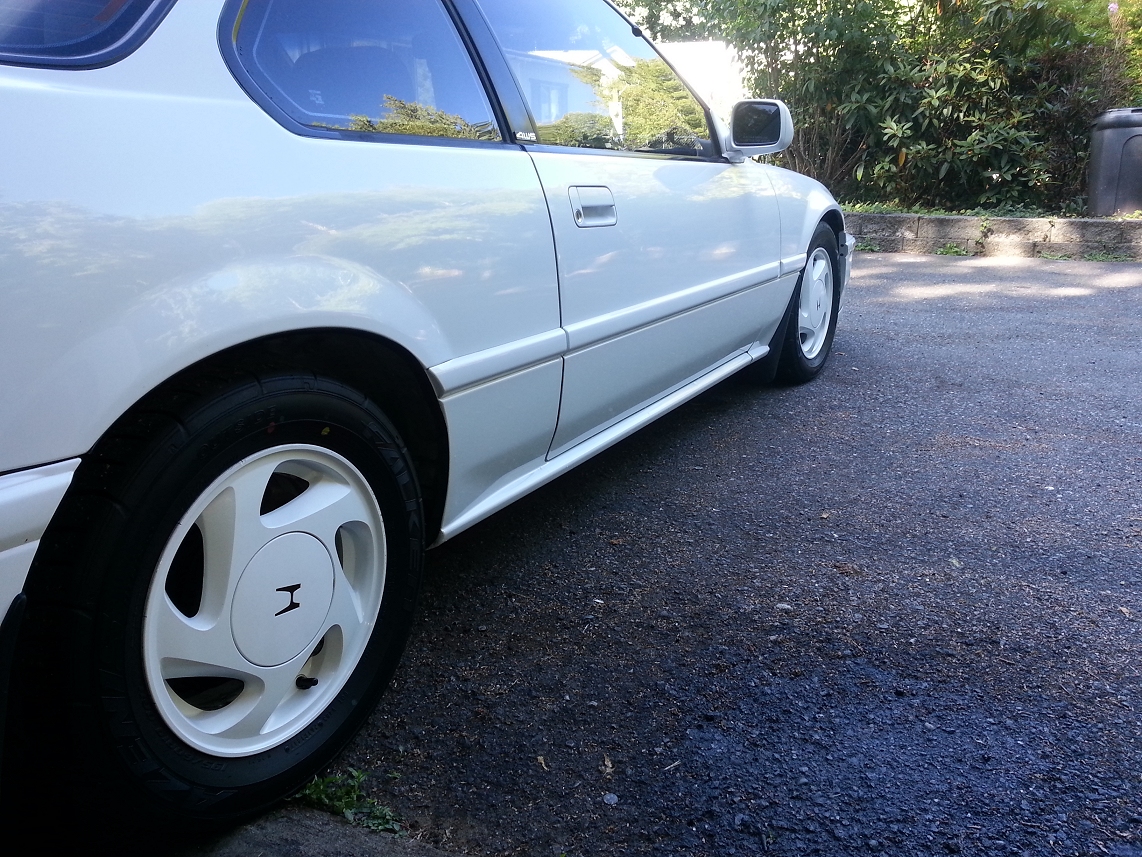 When I assembled the shocks and springs I left the dust shields off and used stock bump stops. After installing and setting the car on the ground I checked the shocks to see how much travel they would have before hitting the bump stops. I was somewhat surprised to see that they were already sitting on the stops in the front and looked to have .25" - .5" of travel in the rear. I cut the stock bump stops in half and that gave me acceptable travel in the rear but the front still only had about .25" worth of travel. This means I would be hitting the stops quite often. The car isn't even that low either, which means most people running sport or especially race springs are probably riding on their front bump stops all the time, even if they are cut. There simply isn't enough travel available in then front due to the low hood line.

The easiest solution at this point was to modify the stock top hats into raised ones, to give me more shock travel. I was able to raise them enough to give me approximately 2" more travel in the front and 3" in the rear. Here is what they look like: 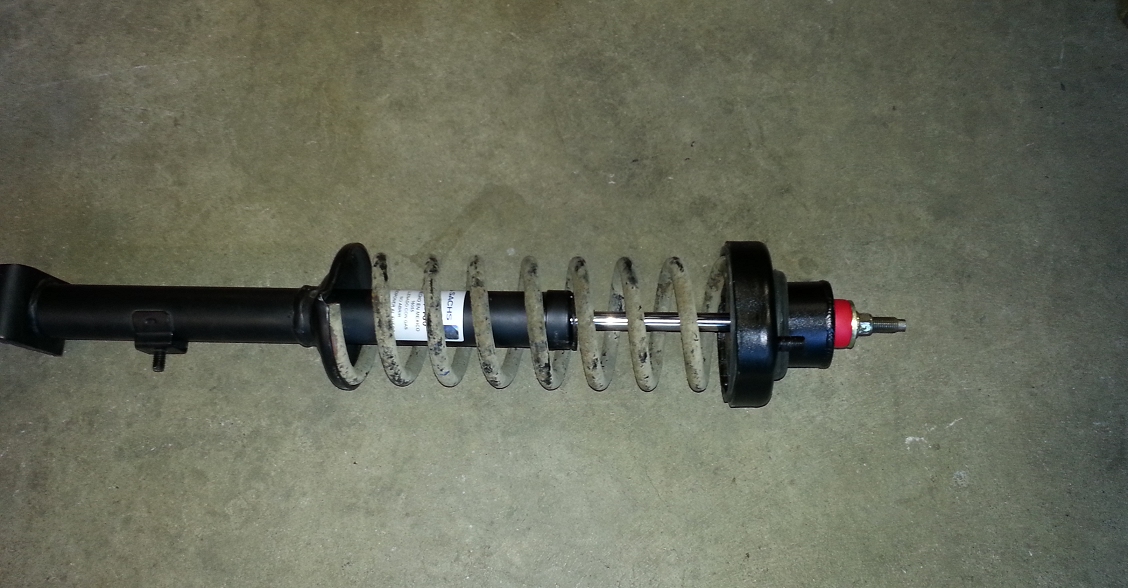 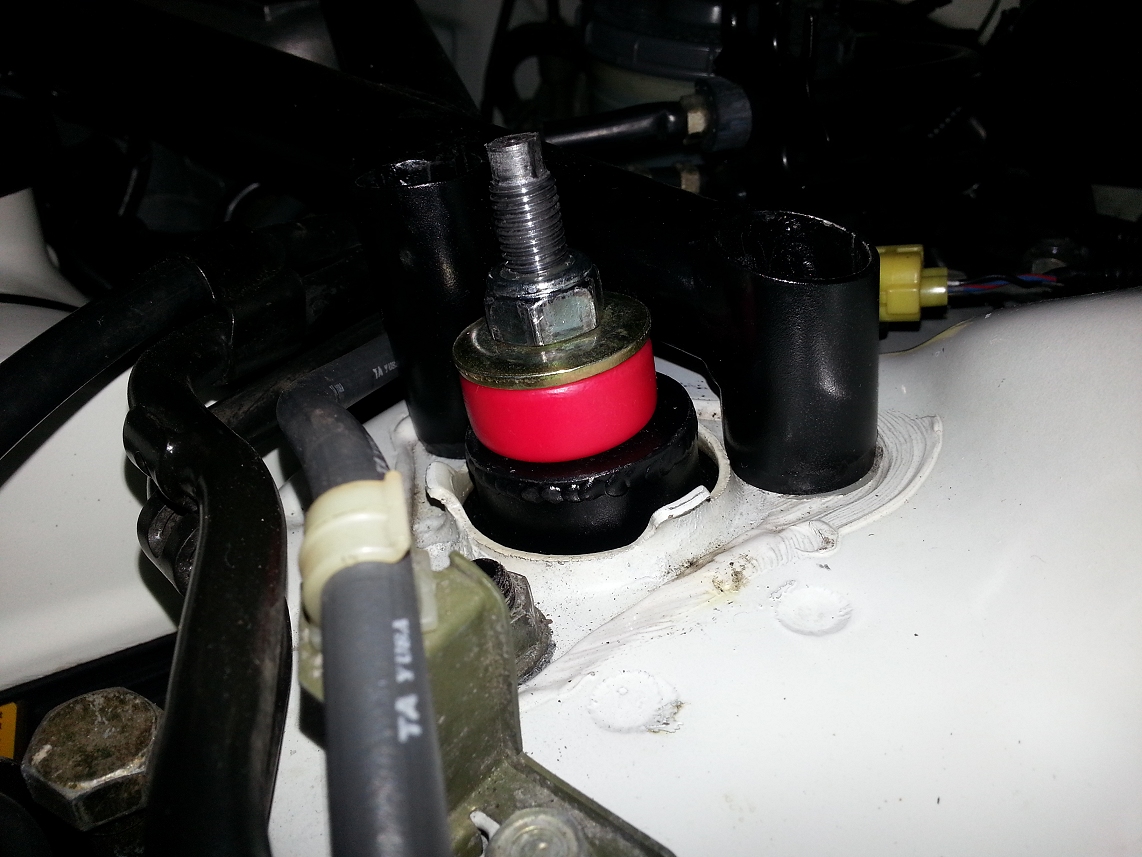 The red top bushings were only temporary until some black ones came in.


At this point I had decent travel before I would hit the cut-in-half bump stops. But since I'm going for a "stock +" setup I wanted a way to ride on just the springs for cruising and minor dips/bumps, but then quickly ramp up the spring rate as the suspension started to compress. (This would give me a good ride quality while still controlling body roll and potential to bottom out) To achieve this I switched to progressive bump stops: 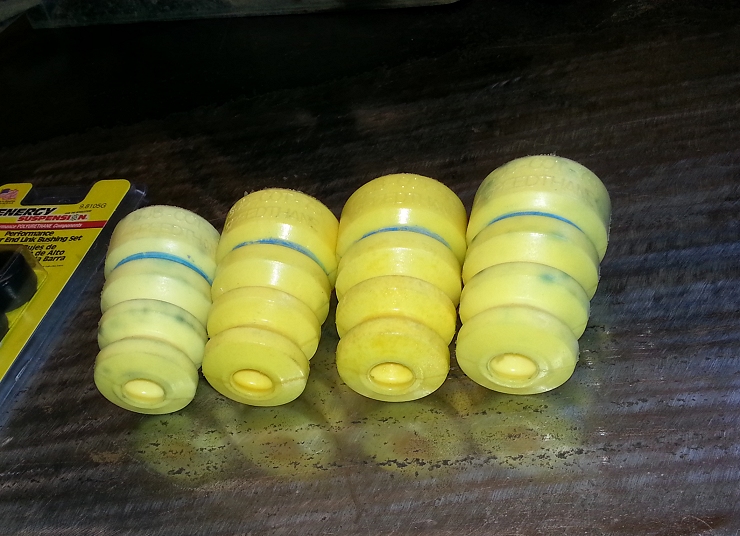 Unlike the stock bump stops which shoot the spring rate up suddenly these are much more gradual, you want them to intentionally make contact at some point. It would be better to think of them as secondary springs that add rate to the coil springs as they are compressed. Here is a graph showing the amount of increase as they are compressed: I had to cut the big end off the fronts so they would fit up into the raised top hat, right now they have like 1/8" travel before they start to compress and add spring rate to the front springs. In the rear I didn't need to cut them and they have ~1/2" travel before starting to compress. The ride quality is very good until I start hitting big dips of bumps. I've ordered a new set of COT Red bump stops for the front, which are softer than the blue ones. I think with those installed in the front the car should handle the big bumps better but still not have any problems with bottoming out.

That about covers where I am with tuning the spring/shock assembly, I will update after installing and testing the softer front stops.
Top

Got my blue bump stops swapped out for the reds in the front. Riding real nice now. 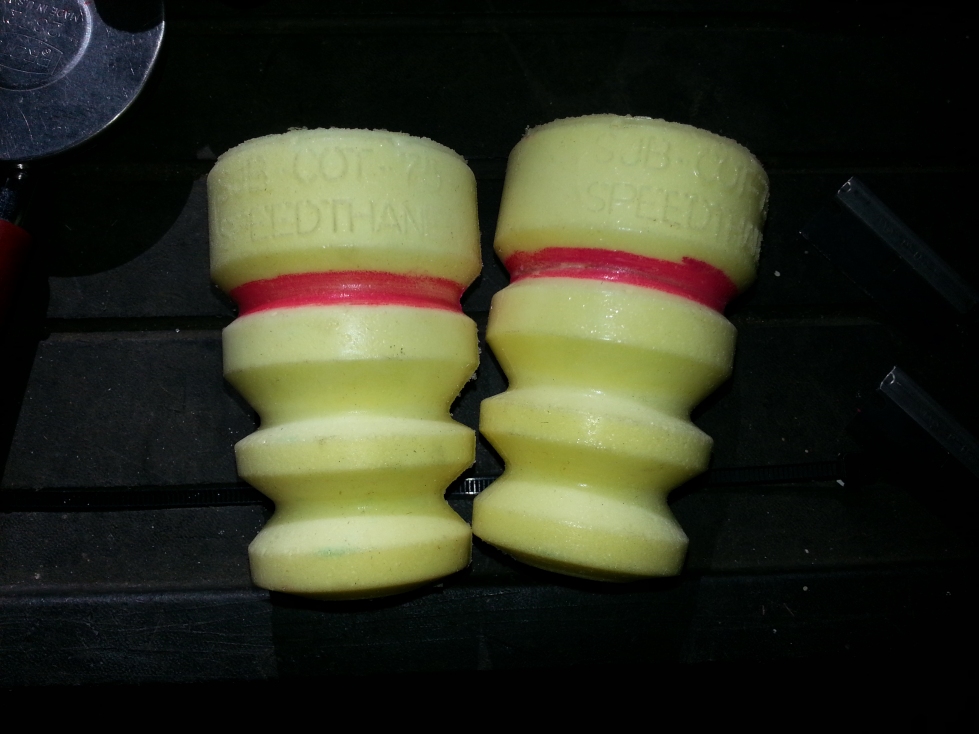 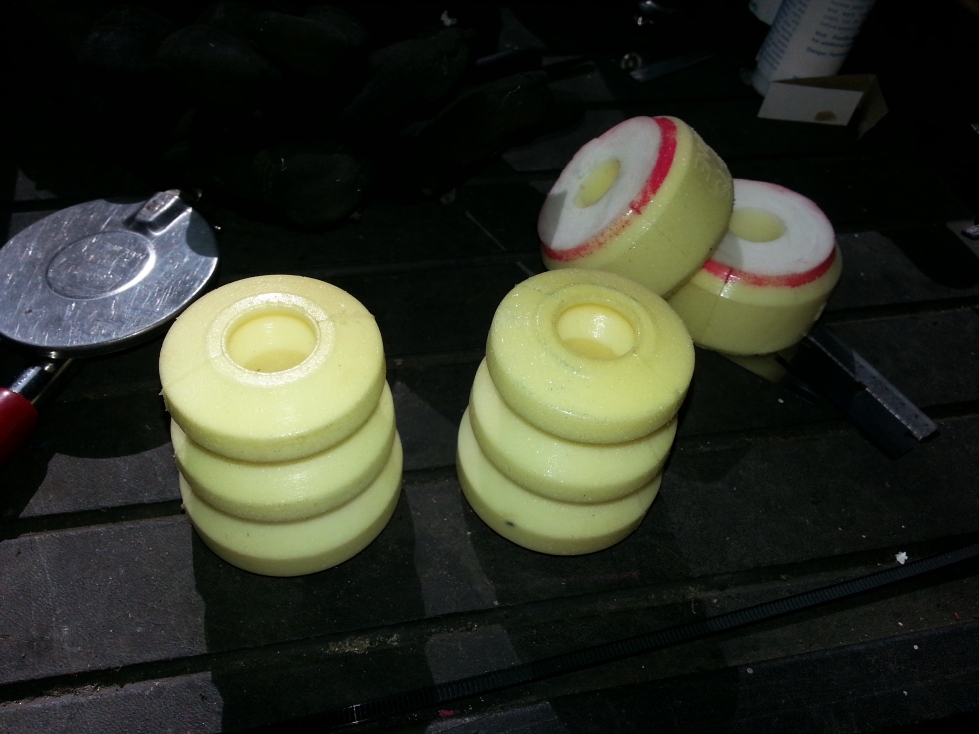 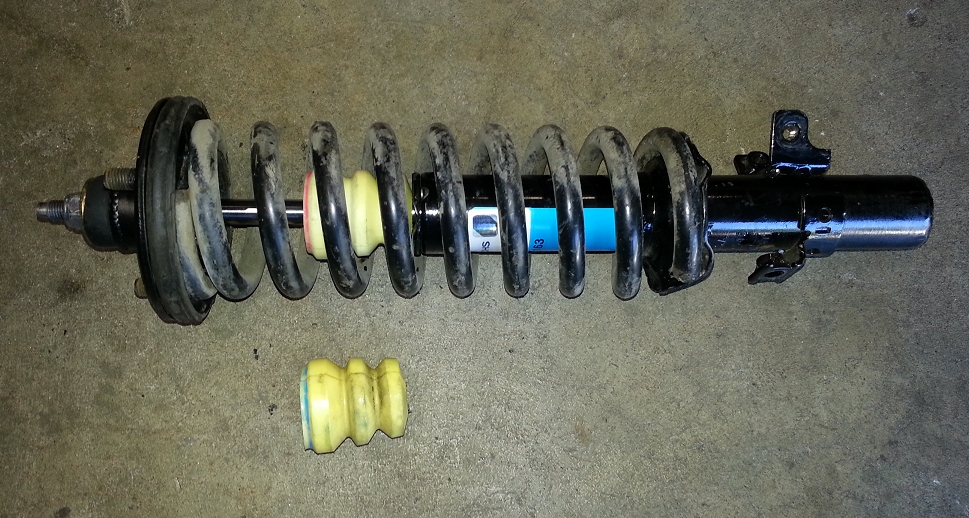 I would still like some more shock travel in the front. Looks like there is some extra space between the bottom of the shocks and axle, I think if I make some custom shock forks I should be able to get another ~1" of shock travel. That will be something for the future though as the car is great as it is.

Next I plan to install some dust boots for the shocks (OE won't fit because the bump stop diameter is too large), there are also a few minor squeaks in the rear I need to take care of.
Top

Well it seems I flew a bit too close to the sun on this setup. On the right shock tower I noticed this: 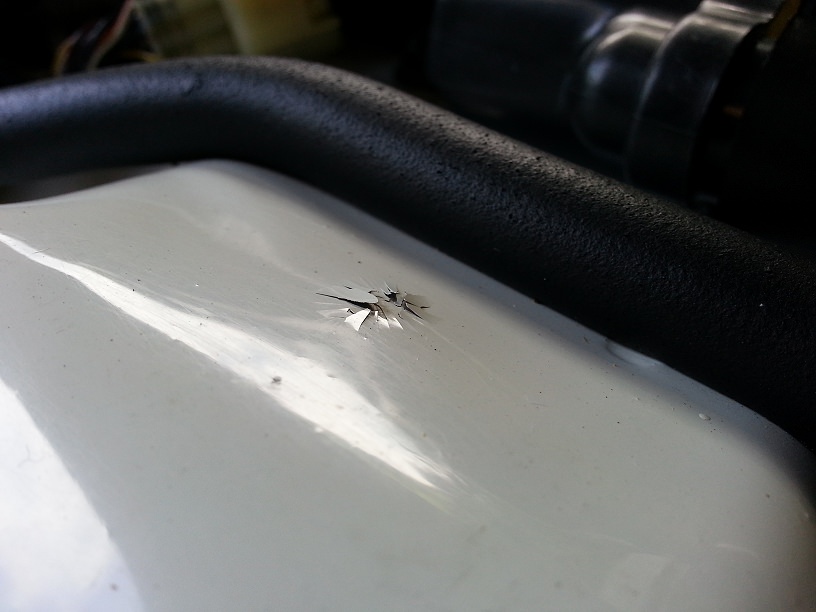 Yep there was some slight contact inside the fender (the upper balljoint touched). I knew this was a possibility running the softest bump stops. There wasn't anything on the other tower so I think it is right at the limit like this. There is one up side to this however; I now know that there is no chance of running out of shock travel.

In order to stop any more contact I am going to raise the front very slightly and add ~1/2" of bump stop back. The extra bit of bump stop I'm adding is from the old blue stops.

Using another set of stock springs I cut 2 coils off (current springs had 2.25 removed). So here are the spring rates as is:

Just 13 lb/in less in the front than before. The increase in the ride height is minimal, maybe +3/8"


While I had it all apart I did some unrelated stuff. On the top hats I added some tube around the bushings to keep them from walking to the sides, like the OE ones. On the rear shocks I also added some generic shock boots. I couldn't put them on the front because the inner diameter of the front springs is too small for them. Here is how it all looks now: 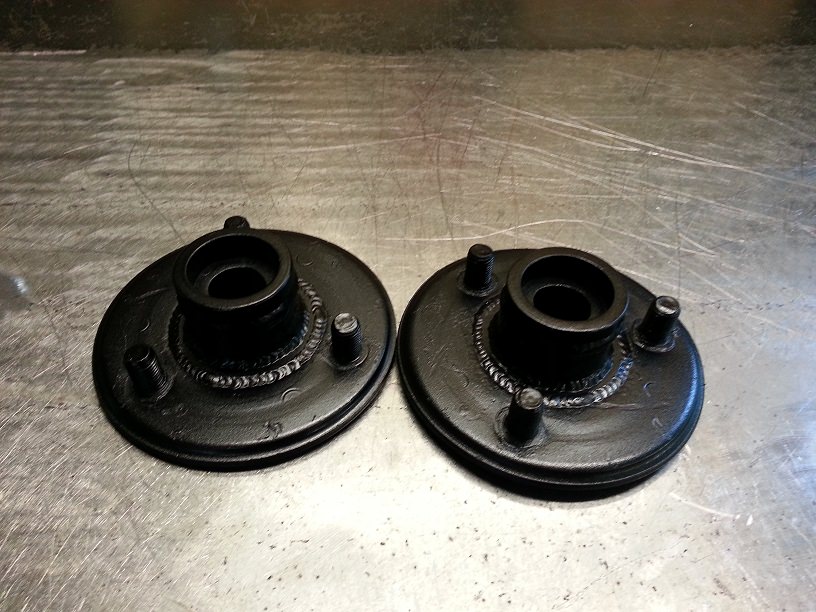 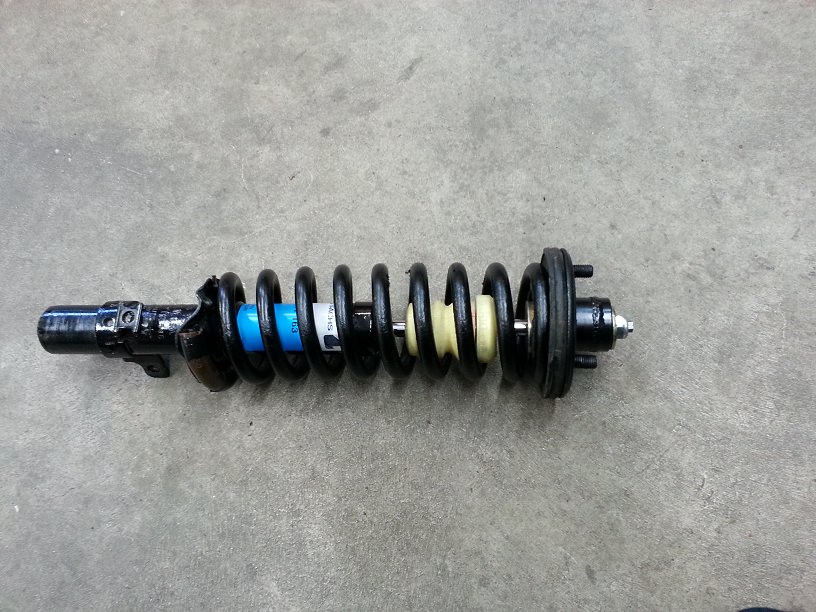 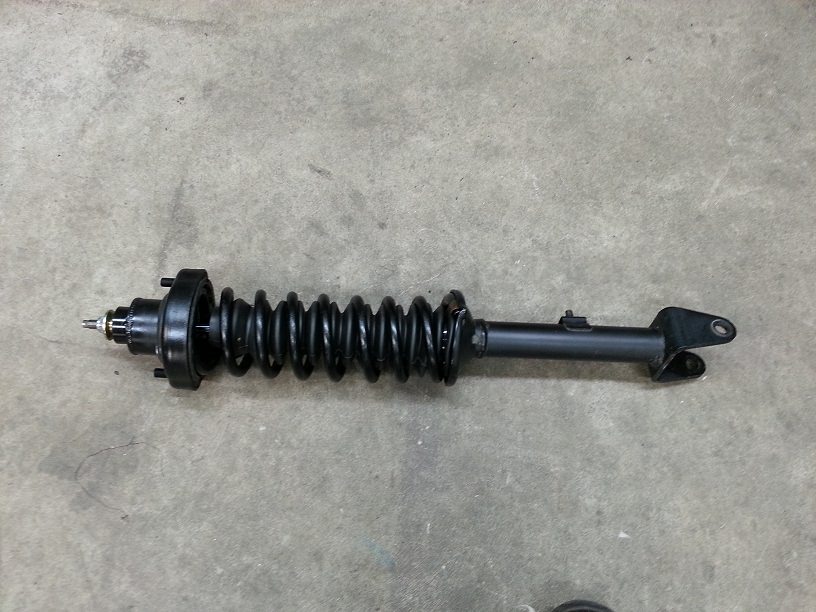 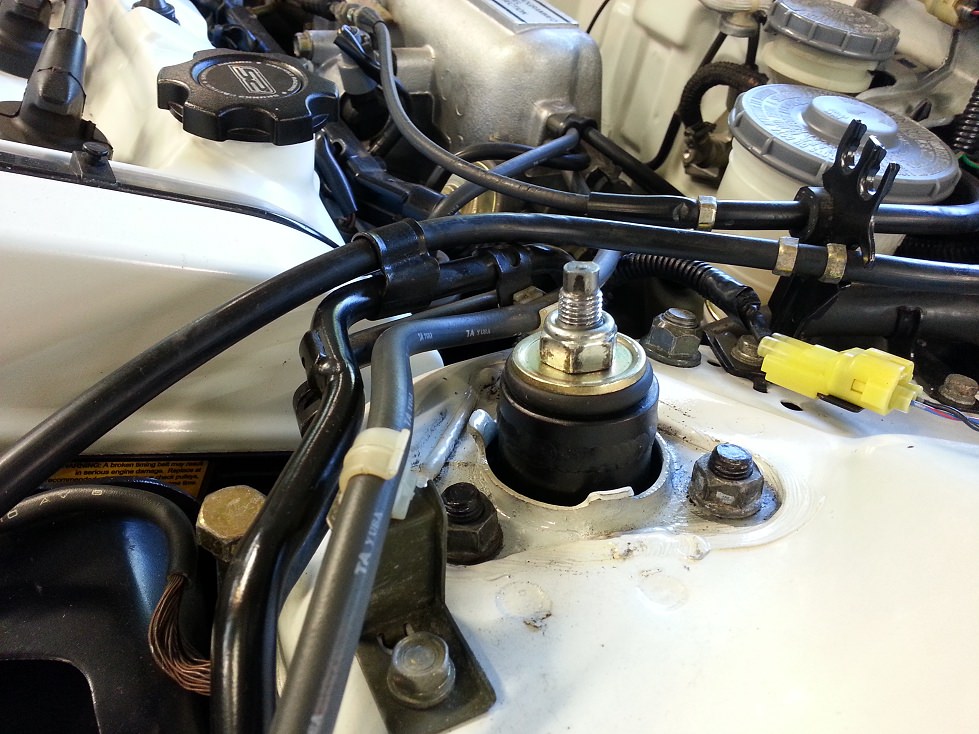 The fronts are now coming too close to my tower bar like this so I've left it off for now, I was planning on making a new one anyways so no big deal.
Top
Post Reply
3 posts • Page 1 of 1